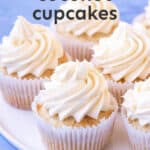 Soft and sweet, these buttery Coconut Cupcakes are filled with toasted coconut and topped with swirls of creamy coconut buttercream frosting.

Soft and tender coconut cakes filled with toasted coconut and topped with swirls of coconut buttercream. Can you even?!

If you love all things coconut and are still fond of the cupcake craze, you’ll fall madly in love with these cupcakes and their fancy pants frosting.

Last year, I published my Coconut Cake recipe, and since then, I’ve been obsessed with coconut cake.

Seriously light and fluffy, with that rich nutty flavour permeating the whole cake, it rivals even the best chocolate cake.

But let’s be real. The magic is in that dreamy, creamy coconut frosting. I mean, just pass me a spoon and I’m done. All finished with a few crisp coconut flakes.

These pretty Coconut Cupcakes are perfect for celebrations like weddings, engagement parties, baby showers and the like. There’s something sort of magical about their cloud-like white appearance.

Why You will love these cupcakes

HOW TO MAKE COCONUT CUPCAKES

We love buttercream here at Sweetest Menu. Earlier this year, I shared all my tips and tricks for making perfect vanilla buttercream.

But now there’s a new kid on the block: coconut buttercream. And it just might be my new favourite thing. It’s delightfully smooth and buttery – like a good frosting should be. But the addition of coconut cream makes it FULL of flavour with a lovely, thick texture – perfect for piping.

What is desiccated coconut?

What’s the difference between coconut milk and coconut cream?

Coconut milk and coconut cream are not the same. Coconut cream has a higher fat content and is therefore thicker in consistency and richer in taste. Coconut milk is thinner and more watery in comparison. While I prefer to use coconut cream (because of it’s creaminess) in both the cupcake AND the frosting, coconut milk does still work well.

Do I use sweetened or unsweetened coconut?

Here in Australia, our store bought coconut (whether it’s desiccated, shredded or flaked) is typically unsweetened. So that’s what I have used in this recipe.