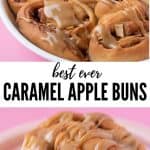 Homemade Caramel Apple Cinnamon Rolls made from scratch. These light and fluffy rolls are packed with juicy apples, cinnamon sugar and loads of brown sugar caramel. 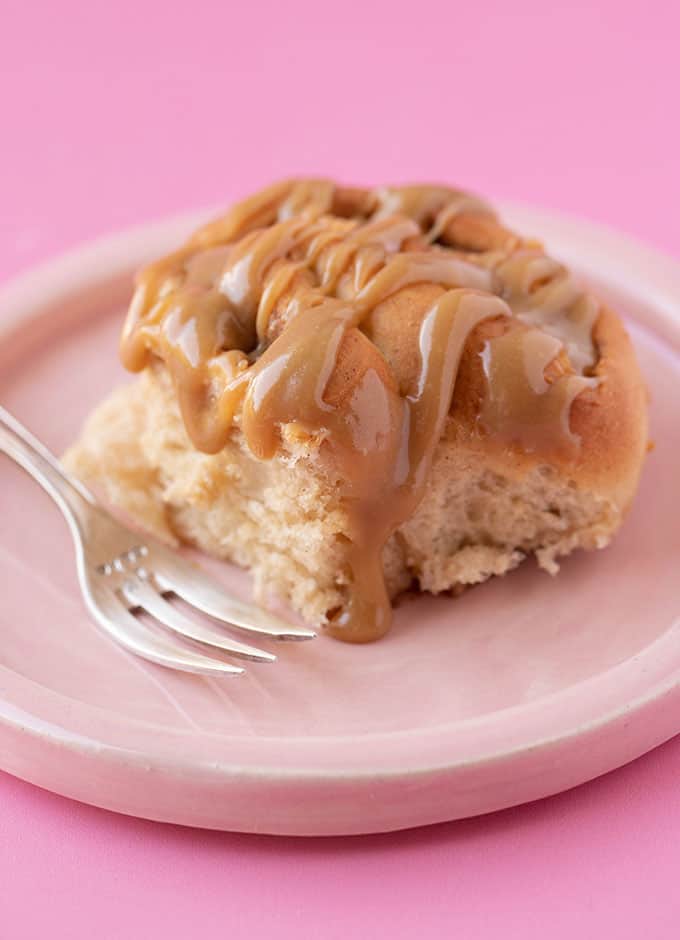 I know it seems like Cinnamon Buns can’t get any better but THESE Caramel Apple Cinnamon Rolls are next level. They’re soft and sweet and THAT caramel sauce gets me every time. 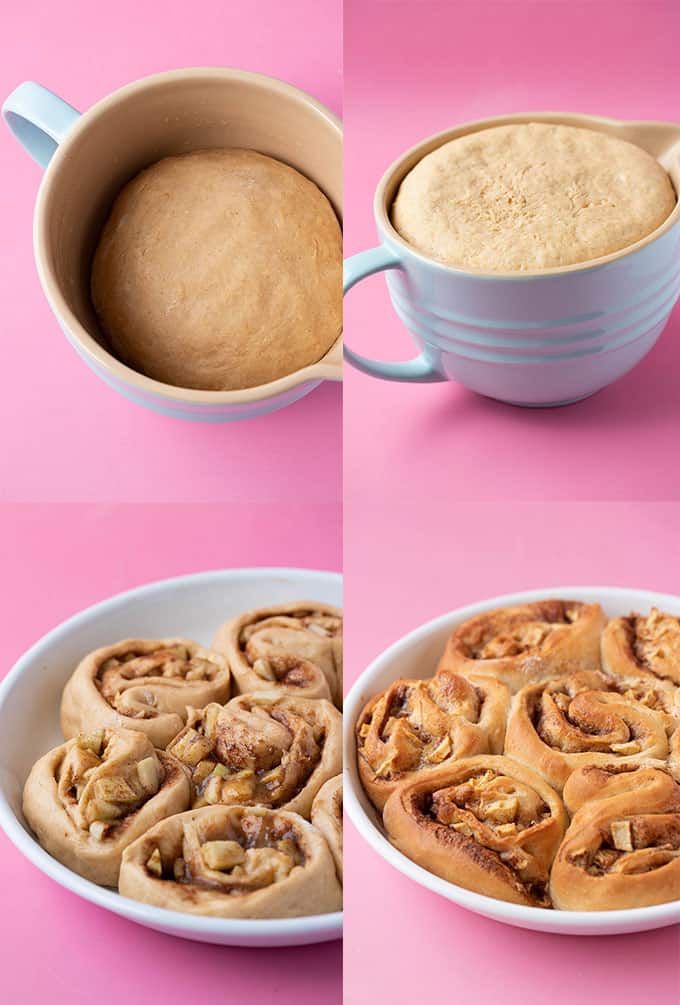 Have you ever made Cinnamon Rolls at home? There is something so incredibly soothing and rewarding about working with dough.

It may be a little time consuming but pulling homemade bread out of the oven, with that sweet aroma hitting the air, is hands down one of my favourite things! And how impressed will your friends and family be when you pull these gorgeous Caramel Apple Cinnamon Rolls out of the oven! 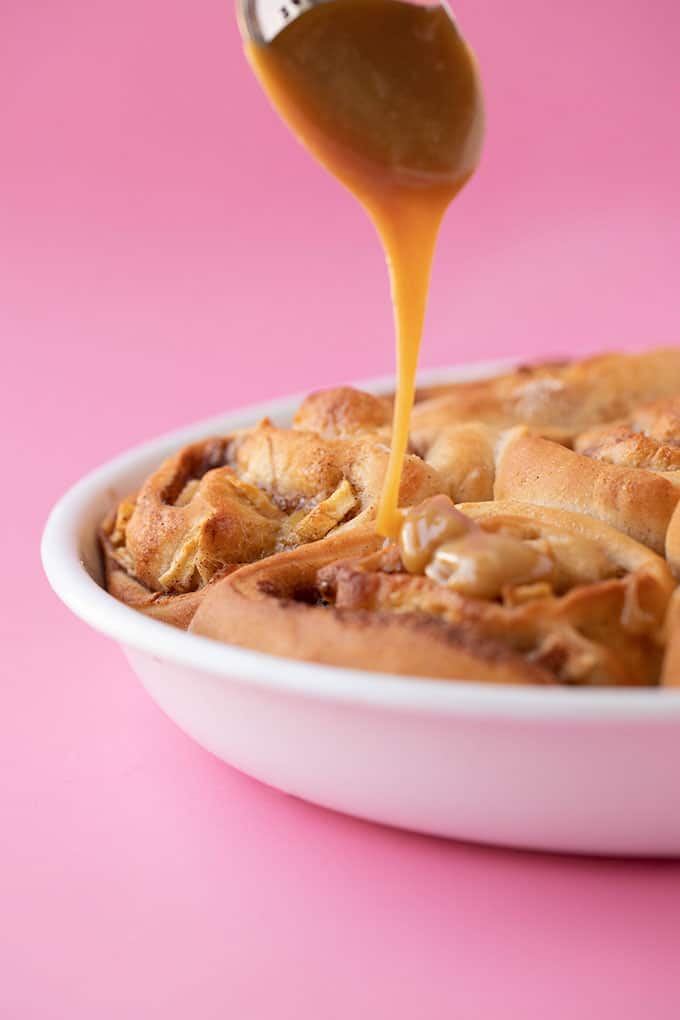 I took inspiration for this recipe from my Hot Cross Buns. But when you add in apples, cinnamon and caramel – I think these rolls have them beat!

We use instant yeast to make the dough, so you will need to make sure you have a little time on your hands to let the dough proof. It’s actually really fun to watch it grow – it will almost double in size in just an hour.

Once it’s proofed, you can knock the air out of your dough with your fist, roll it out and add your filling. I used a sweet mix of brown sugar, caster sugar and cinnamon. Sprinkle over some chopped apple and then it’s time for the star of the show – that caramel sauce 😍 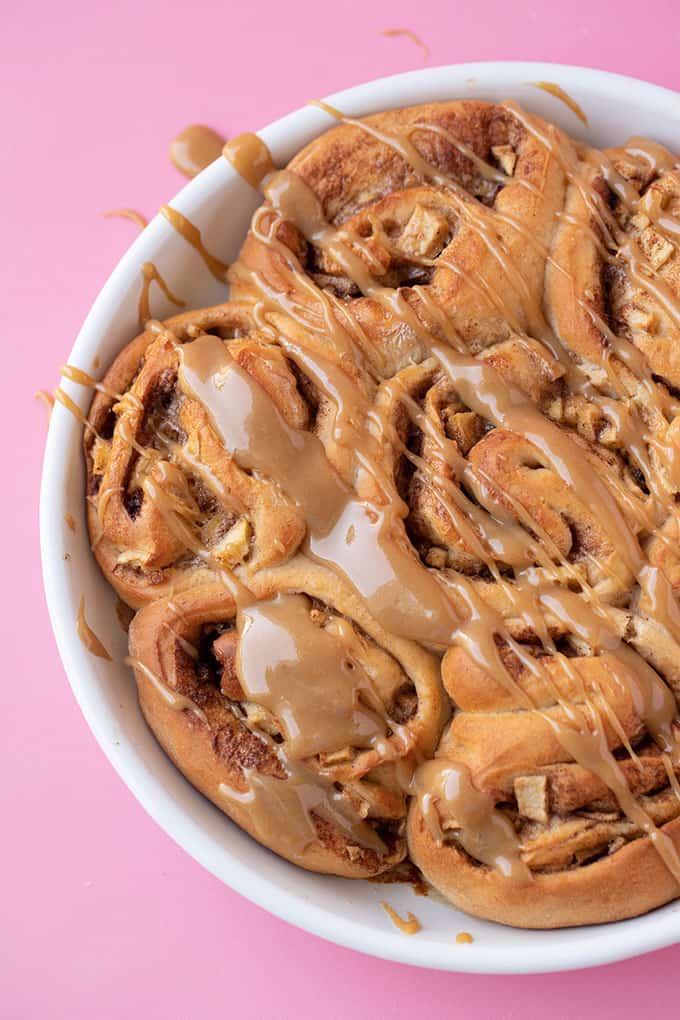 Instead of using white sugar, butter and cream, this caramel is made with brown sugar and condensed milk. It’s made on the stove and comes together in minutes.

It produces a thick, rich caramel that’s easy to eat straight with a spoon (tell me I’m not the only one?! 😂) And it’s PERFECT for these Caramel Apple Cinnamon Rolls. It’s lathered inside the rolls and also smothered all over the top while they are still warm. I can’t even! 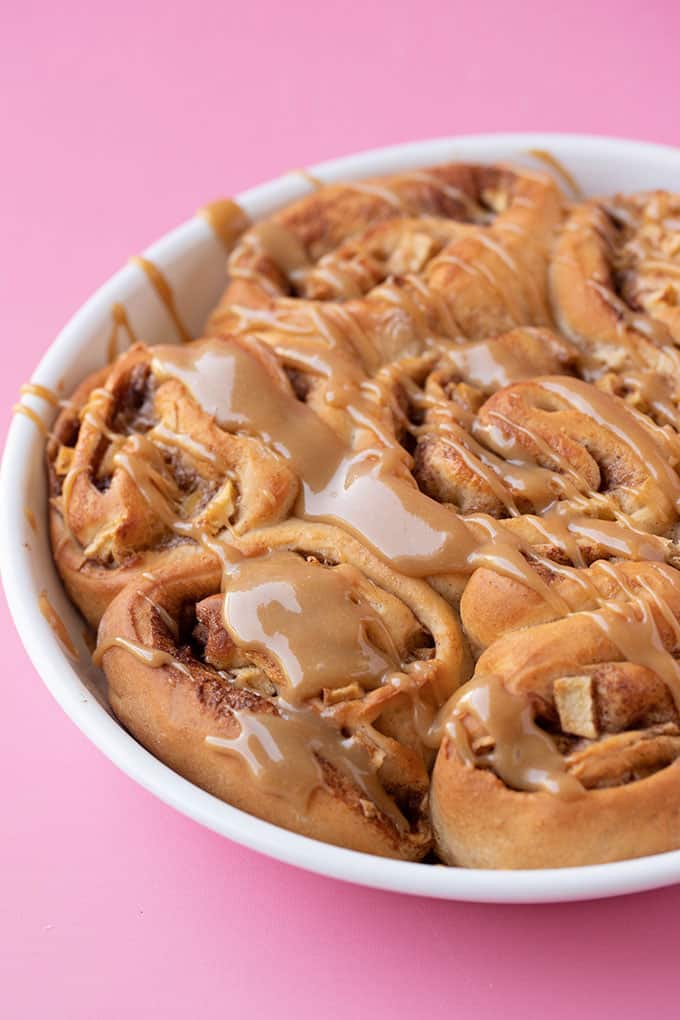 Test your yeast
You will use instant dry yeast for this recipe. Sprinkle it over warm water and give it 5 minutes to activate. You should be able to see the yeast go a little frothy on top and bubble around the edges. That’s how you know your yeast is ready – if nothing happens, your yeast may be expired or old.

Let your milk mixture cool
I’ve written this recipe to include melting your butter and milk together on the stove. Do this over a low heat just until the butter is melted. If the mixture is too hot, it could kill the yeast. If you can stick your finger in it and it’s warm but not hot, you’re good to go. If it’s too hot, leave it for a few minutes to cool before adding to your stand mixer.

Don’t over-mix your dough
It can be easy to over-mix your dough but you really don’t need to mix it for long. Once you add the flour, mix on a low to medium speed until a soft dough naturally forms. Take it out of your stand mixer and knead it with your hands for a couple more minutes until it’s smooth. It should come together in about 5 minutes tops.

Don’t add too much flour
It can be tempting to add more flour if your dough appears sticky. You can add 35 grams (1/4 cup) extra flour, but try stick to the measurements given in the recipe. The more flour you add, the more dry and dense your rolls can be – and we want them nice and fluffy! And remember, when you knead the dough with your hands on a lightly floured bench – it will absorbed all that flour too.

Softened butter not melted
Use softened butter for the filling not melted butter. I’ve tried both. When baked, butter that has already been melted just seems to disappear, where as softened butter melts as it bakes which give you that lovely wet filling – like a Cinnabon!

Don’t add too much caramel to the filling
It’s easy to go a bit overboard and add loads of caramel when filling these rolls, but although delicious, it’ll make them quite hard to roll. Just drizzle 1/3 to 1/2 of the caramel and save the rest for drizzling all over the top while they’re warm.

Don’t over bake the rolls
These rolls don’t take long to bake – just about 20 minutes in the oven will do. They should go golden brown on top and be light and fluffy in the centre. If you roll them from the short end to make bigger rolls, they might just need an extra 5 minutes in the oven.

Enjoy fresh on the day they are made
Unfortunately bread made from scratch doesn’t keep well, so I recommend enjoying these straight out of the oven while still warm! 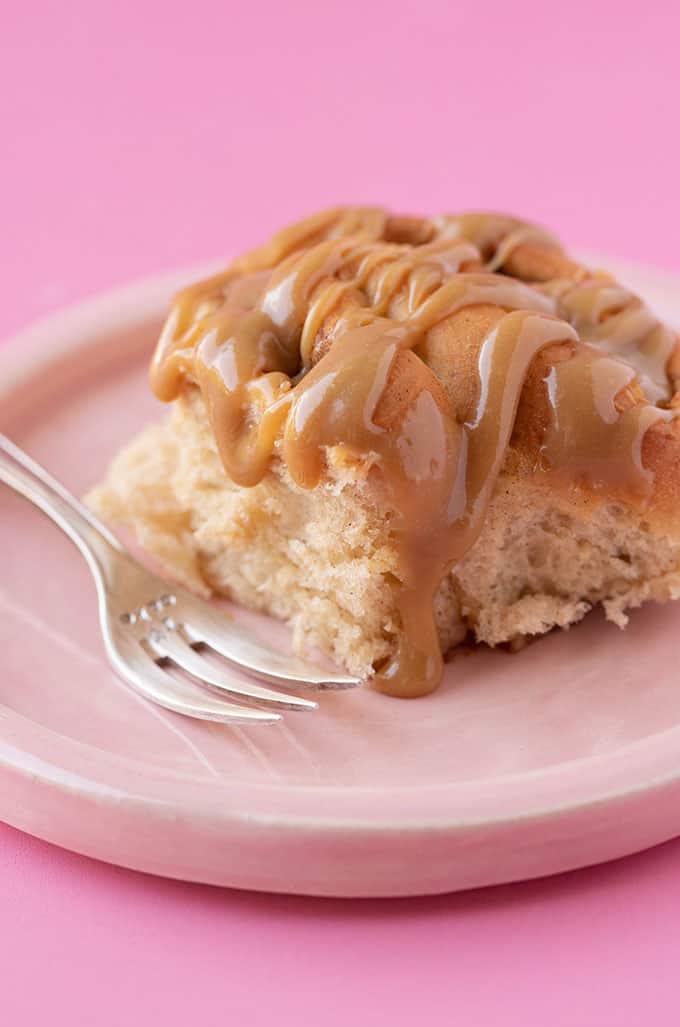 *If the dough is too sticky to knead with your hands, you can add 35 grams (1/4 cup) extra plain flour. But only add it if you really need it. Too much flour will make your dough dense and dry instead of light and fluffy! 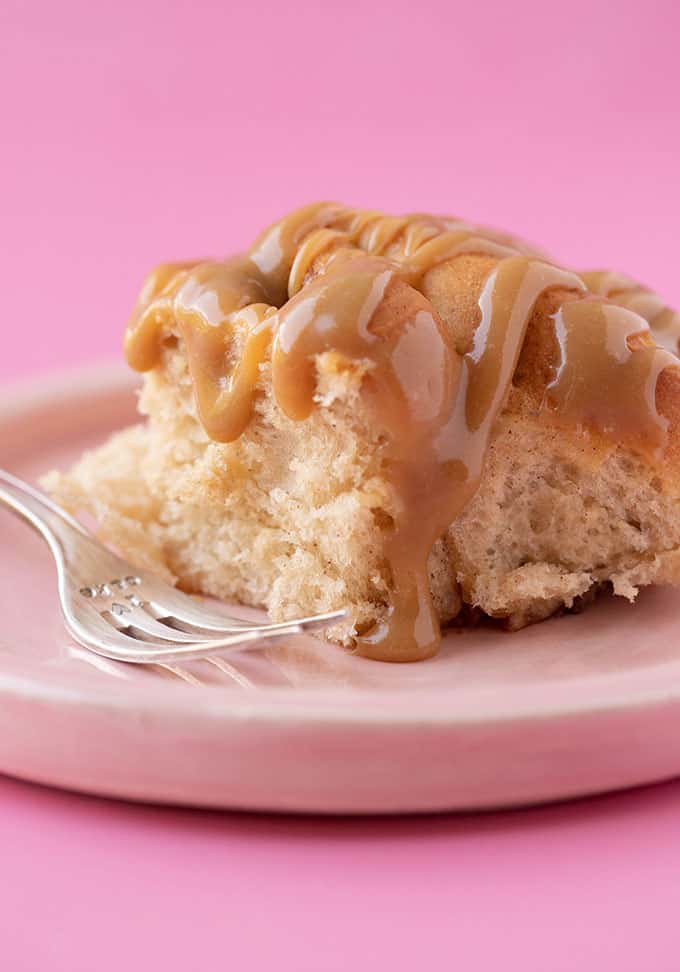 This recipe was first published on Sweetest Menu in September 2016.